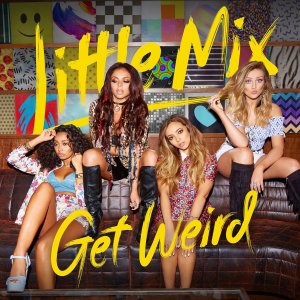 This has been a long awaited album for Mixers, the fans of girl group Little Mix. I can tell you that I have been dying for their third album after they released their sophomore R&B styled album, Salute in 2013. Well, this album does not disappoint.

Get Weird has an accurate title. The album itself is a little weird, but it fits Little Mix. It’s a venture away from their usual music, but it’s actually pretty good. The song “Weird People” describes how everyone is weird, but it’s okay. I kind of wish this had been a start-out single for them, but their two huge singles, “Black Magic” and “Love Me Like You” did amazing on the charts and helped promote the girls really well.

Another song of theirs, “Secret Love Song”, features Jason Derulo and it’s not a bad ballad. Perrie Edwards’ vocals in this song are A+. But then again, all the girls (Edwards, Jesy Nelson, Jade Thirlwall, and Leigh-Anne Pinnock) are always A+ with their vocals. I have never heard a Little Mix song where their vocals are not good. Every song on this album showcases how good of a group Little Mix is. Something I also love about these girls is they all split the vocals equally. There is no girl that has most of the lines in every song, and they share the verses.

Every song on here accurately depicts how the girls have matured since they started out on The X Factor. One song that shows this is the wonderfully titled “Grown”. “Don’t you know I’m grown now?/Don’t you know that I can hold my own?” are some lyrics in the chorus and I think they are fabulous. Another hit is “A.D.I.D.A.S”, which stands for “All Day I Dream About SHH (with you)”. The beat is great to dance to (and it name drops Drake!), and features a kickass rap from Pinnock, who rapped a little bit on the last two albums. One other stand-out song on this album is the last track on the regular version, “The End”, which is one they had performed live multiple times before the album was released. It’s mostly a Capella with very little music in the background, which is something the girls excel in. “Love isn’t fair/and I swear/this time/this is the end” is the chorus and I LOVE IT. I just wish the song was a little longer rather than a time of only 2:12.

This album was definitely a stretch from what we’re used to with Little Mix. Their first album, DNA, was a mixture between pop and R&B, while Salute was straight up R&B. The band stated themselves that it took so long to release a new album because they did an entire record before ditching it to do something else. That was probably one of the best ideas for them, because Get Weird is totally pop and it’s a wonderful album. It showcases how hard they have worked for this and they absolutely deserve the success. Nice job, Little Mix. Keep on slaying.